Standing tall and just 20 miles from Embley, our fleet of boats are moored at Lymington Harbour. Sailing has been a popular sport for a number of years across the school with many of our children from Prep to Sixth Form enjoying our Keelboat Programme. It also forms part of our Games option at Senior School and sees between 120 to 150 pupils on the water every month throughout the season. We also have an active team of sailors who compete in regional and national dinghy sailing events.

For the fourth consecutive year of racing, Embley’s sailing team triumphed in the 2022 Round the Island Race. 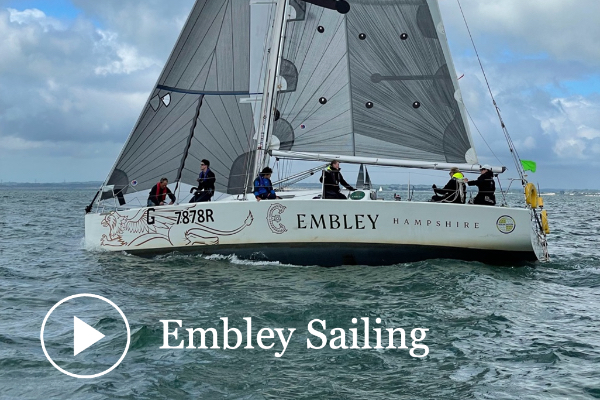 While some of the school’s children are experienced sailors, many have their first taste of coastal keelboat and powerboat water sports within the school curriculum. ‘King George’, one Embley’s Keelboat fleet, is a modified Etchells 22 that was heavily upgraded to take on the Jester trans-Atlantic race before being acquired by the school. Its classic lines and stunning performance make it easy to handle by young keelboaters.

Our Stewart 37 brings a whole new experience to the school’s sailing programme. Set up for single and short-handed racing, she is easily driven, hitting 10 knots in very moderate winds and planing up into the mid-teens when the wind fills her spinnaker. But with a 2.5 tonne keel eight feet below the waterline, she is stiff and predictable. Exciting and challenging, but well-proven, the stripped-out race thoroughbred takes the school’s more accomplished sailors into junior offshore group and cross-channel races.

Embley is a member of the British Schools Dinghy Racing Association, enabling our active sailors to represent the school on the water in a series of regional and national team race events. A highlight of the year is the Eric Twiname Team race event in Oxford, where over 280 sailors from 54 teams compete in fast tactical races. Unlike traditional racing regattas, team racing sees sailors sharing boats as they battle not to be last over the line. Under 17s compete in RS Fevas (2 boat per teams) and Under 19s Fireflies (3 boats per team).

Team racing is a fantastic way for sailors to sharpen up their racing skills and close boat on boat tactics, it is also the predominate sailing activity held at universities around the country. This group is run by parents so to participate parental involvement is required; sailors also must be up to racing standard. Training sessions are held on the Solent launching from Lymington.