The one you feed

The return to school after the Christmas holiday is always a time of anticipation and promise. In my start of term Assembly, I suggested to the children that it is a time of resolutions that indicate a desire to improve some aspect of our approach to life. I suspect reader that we are all too aware of the resolutions made and within weeks if not days of how the spirt, once willing, weakens with time and resolve far from being stiffened, is dissipated by degree.

I had occasion over the holiday to do some reading. One of the observations I had from university life is that the capacity and desire to read was very often dictated to by the course but instead of reading the subject of matriculation this student strayed across the library corridors to avenues and alleyways less trodden by my peers. But I thought all the better for it. Amongst the titles that crossed my path was the lovely work by Rutger Bregman: Humankind, a hopeful history. 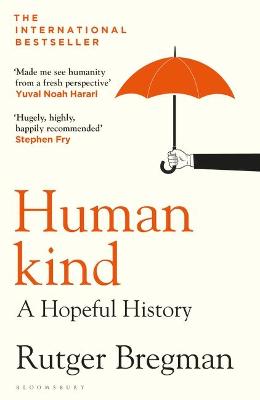 Bregman’s book is a timely antidote to so much of what we are exposed to in the news and beyond. The capacity of humans to be kind and considerate, the many instances (indeed the legion of instances) where the capacity of humans to reach out and care for strangers, as well as those known to us, is hugely underreported. I suspect this is hardly reported at all.

I once worked with a chap who had been a staff photographer with The Guardian and a variety of other broadsheets before joining Vogue. He explained that he sent a variety of shots down the wires to the newsroom where a small body of, usually men, decided on the headline, the story and the organisation of the paper. They were informed, he said, by their own preoccupations and bias both conscious and unconscious. The news we read today is hardly ‘The’ news, but snippets of human endeavour chosen to make headlines and create waves of interest. It sells copy.

Bregman’s focus is elsewhere, quieter but deeper and of more lasting importance. He recalls the story of an old man talking with his grandson. Inside him, he told the boy, raged a war between two wolves. One was snarling and vicious, caught in his own greed and distaste, the other gentler and more honest, kind, open to others and willing to inquire. The boy asked which wolf won the fight?

It was to this point that I challenged the children. The resolutions to be fitter, faster and so forth are noble, worthwhile and inspiring. But what about the resolution to be kinder? It is a greater challenge but more immediate, accessible and you can take it on while eating (and sharing) cake. Quite a bit to be said for that. It doesn’t come with a membership fee and there are no special clothes or opening hours. So what’s stopping you?

In the course of my challenge to our students, I contrasted the ‘banality’ Arendt talked about in her book Eichmann in Jerusalem. The failure not of intellect, so to speak, because Eichmann was a reasonably clever man with significant organisational ability. What he lacked was any hinterland of interest in others. He had no capacity to consider the world view of those he disagreed with or saw as alien. Schopenhauer in the 19th Century saw it coming. He divided the human into several layers, Freud followed suit but with a different end. The highest level was one he called menschenlibe, love of humanity. A capacity to see beyond the borders of our own experience and regard the world beyond the end of our nose.

There is a temptation to sit safe within our own boundary, which deserves to be challenged. The year begins then with a series of challenges. Operationally we are working hard to keep everyone safe; to continue teaching and learning and evolving the co-curricular programme. Within us all the wolves of conflict will continue to rail against each other because it is part of the human condition. But what about the boy’s question? Of the wolves, which one will win? The answer given by the old man is immediate, obvious and long-lasting. The winner is the one you feed.